SPICE & VANILLA from Katherine Wyvern is HOT and AVAILABLE! Check out my #review of this #transgender #gaylove new release!

Dear Lynn,
Thanks for having me here today to talk about my new book!
Spice and Vanilla came about as a sum of two different story-lines that screamed to be put into words.
One was a spill-over from my previous release, Woman as a Foreign Language. In that story there was a male-to-female cross-dresser whose painful past of disclosure and rejection was alluded to only briefly. I wanted to expand on that element, and explore the tremendous emotional rollercoaster that all parties involved in such a coming-out will go through.
The second story line was sparked in one millisecond when a dear, dear friend of mine described himself as an angel with a bit of a devil inside. That immediately made me want to write this character that is constantly on the fence of… anything, really. He’s gender-fluid, bisexual, a really sweet man with a seriously dark side, and a switch on top of everything…
That was supposed to be a light and hot short story, but when it collided with the first story-line, it became a full length novel and an incredible emotional journey, with one of the most complex characters I ever wrote… there were times when I thought I’d lose my sanity trying to keep up with Raphael’s twists and turns. 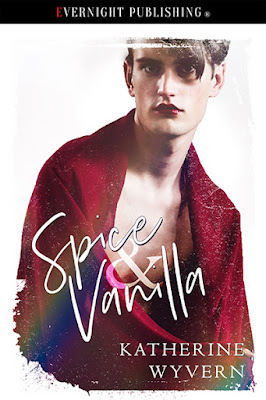 Time was, when Di could dance all night. Time was, when she could ride any horse in the stable. Time was when she had a fiancée, a future and a home she loved. Until a silver SUV came out of nowhere and broke her life in half.
Well concealed under a sarcastic, spiny hide, Hugh has a darkly romantic, passionate soul. Torn between love and terror, he’s held the talented, elegant, magnetic Raphael carefully at arm’s length since the day they met.
Male or female, men or women, kinky or sweet, top or bottom? Angel or devil? Raphael’s life is a string of unanswered questions. And Lucie, his long-hidden female self, may bring it all together or destroy everything he has.

I LOVED Woman as a Foreign Language and didn't think Ms. Wyvern could top that story. Well. I was wrong. S&V goes beyond, pulling in a third party, giving us some hot M/M lovin'. The acceptance and unconditional love given by these characters is admiral, the kind I wish the world would embrace with everyone - ALL.
Heartwarming, panty-melting, luscious, and poetic, this story will satisfy in ways you never imagined. A full five star, thumbs up!

*I won a giveaway copy in Ms. Wyvern's release party.

You can also find an exclusive excerpt on my website, here:
http://meetingivory.wixsite.com/katherinewyvern/spice-and-vanilla-excerpt 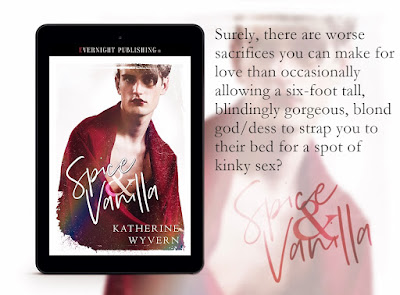 See what Katherine is up to on:

Posted by Author Lynn Burke at 9:22 AM

Email ThisBlogThis!Share to TwitterShare to FacebookShare to Pinterest
Labels: Review